Galaxies all come in different shapes and sizes and it plays on our imagination of what life could be like in other galaxies. However, the Comet Galaxy brings something new to the table. It’s what astronomers and scientists discovered about this galaxy that made it so intriguing. The galaxy is ripping itself apart while flying through space at incredible speeds. 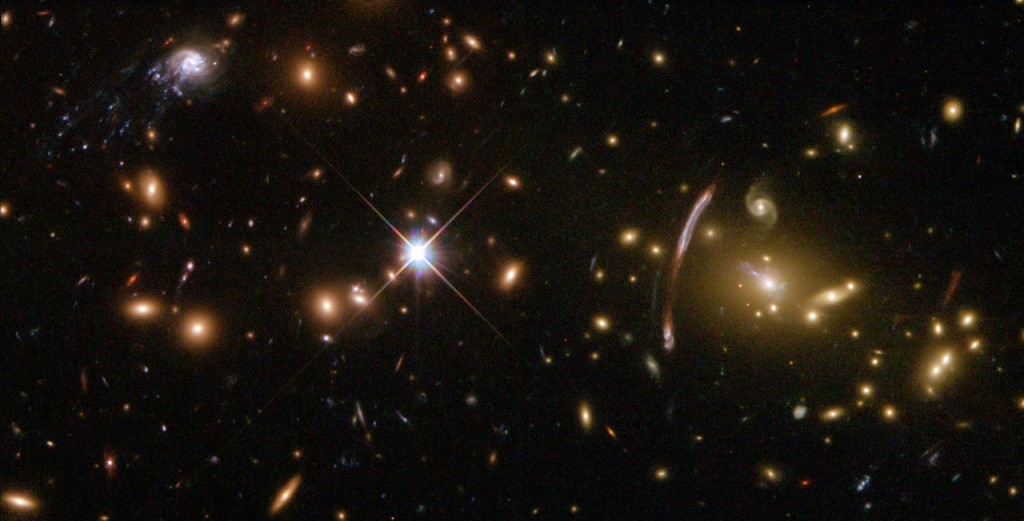 The Comet Galaxy is located 3.2 billion light years away in Abell 2667, so really it takes a very powerful telescope to even see this thing.

The temperatures in the galaxy are estimated between 10 – 100 million degrees Kelvin! Our Sun is around 10,000 -27,000 Kelvin depending on where you measure it. The Comet Galaxy has intense scorching plasma as a result of such high temperatures.

Here’s a close up of the Comet Galaxy taken from the Hubble Space Telescope, about 200 million years into the process. The distance from the main galaxy to the tail is about 600,000 light years. You can really see how the tail is all over the place and the galaxy is barely keeping its form. So what’s causing this?

Well you probably guessed it: the speed of the galaxy travelling through the universe is mostly the culprit. As the galaxy is blasting through space the stars are being stripped away by tidal forces exerted from the cluster. Another reason is that insane temperature! Since the temperature is incredibly high it also means the pressure is incredibly high as well, causing more of that destructive force.

The size of this galaxy is slightly bigger than our own Milky Way. You can try and imagine a galaxy the size of ours (100,000 light years) then imagine increasing the speed by 4 times as much.

The Hubble Telescope took a photo of this comet in 2007 and this led to some very interesting questions.

First, this galaxy is actually a “gas poor” galaxy which means there isn’t a significant amount of gas in the galaxy to produce many stars. Unlike our own galaxy which is very rich in gas and it produces stars frequently. Perhaps, some imagine that all galaxies are gas rich but in fact a study came out that described the following:

There are many galaxies of different shapes and sizes around us today. Roughly half are gas-poor elliptical-shaped galaxies with little new star formation activity, and half are gas-rich spiral and irregular galaxies with high star formation activity. Observations have shown that gas-poor galaxies are most often found near the centre of crowded galaxy clusters, whereas spirals spend most of their lifetime in solitude.

The mystery, gleaned from deep observations of the Universe, is that when the Universe was half its present age only one in five galaxies was a gas-poor galaxy. So, where do all of today’s gas-poor galaxies come from? Scientists suspect that some kind of transforming process must have taken place, but because galaxy evolution occurs over billions of years, scientists have so far not been able to see the transformation at work.

That fact alone is incredible! Not only are not most of galaxies rich in gas but only half of them. When the universe was half the age it is today there was about a 1 in 5 ratio of poor gas galaxies to rich gas galaxies.

Astronomers have concluded that this galaxy will eventually lose all of its gas which will mean the star factory will stop producing new stars and be left with old red stars. It’s an incredibly galaxy to study and has taught astronomers a lot about what is happening with these gas poor galaxies and why we have so many more now.

For further reading or sources used: